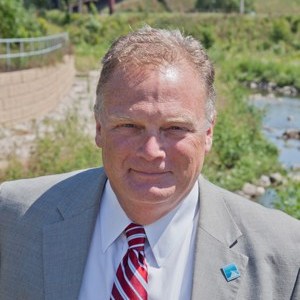 Kevin Shafer has served as the Executive Director of the Milwaukee Metropolitan Sewerage District (MMSD) since 2002. Shafer is responsible for the overall management, administration, leadership and direction for MMSD in meeting short- and long-term goals and objectives; coordinates the establishment of strategic goals and objectives and their approval by the Commission; oversees the development of policies and operating plans; and represents MMSD to its customers, bond rating agencies, and the public.

Prior to joining the District, Shafer spent 10 years in private industry with an international engineering firm in Chicago and Milwaukee, and six years with the U.S. Army Corps of Engineers in Fort Worth, Texas. He holds a bachelor’s degree in science and civil engineering with a specialty in water resources from the University of Illinois and a master’s in science and civil engineering from the University of Texas. He is a past president of the National Association of Clean Water Agencies. He currently serves as the Chair of the US Water Alliance Board of Directors and is the Co-Chair of the Water Research Foundation (WRF) Board of Directors. He is a past member of the EPA’s Local Government Advisory Committee.